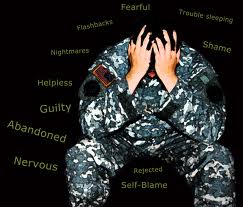 We all know that suicide amongst our Veterans and Active Duty Service men and women is high, but here are the troubling statistics from the VA Suicide Data Report. I think many of you know I have taught and worked with Veterans, and that my son is a Veteran, and this report makes me so sad, and angry. It also pushes me to try to do more to help.

Key findings include the following:

The burden of suicide resulting from firearm injuries remains high among Veterans. In 2015, the percent of suicide deaths that involved firearms remained unchanged from 2014 at 67.0 percent.

After adjusting for differences in age, the rate of suicide in 2015 was 2.1 times higher among Veterans compared with non-Veteran adults.

After adjusting for differences in age, the rate of suicide in 2015 was 1.3 times higher among male Veterans compared with non-Veteran adult men.

After adjusting for differences in age, the rate of suicide in 2015 was 2.0 times higher among female Veterans compared with non-Veteran adult women.

In 2015, an average of 20.6 active-duty Service members, non-activated Guard or Reserve members, and other Veterans died by suicide each day. 6.1 of these were Veterans who had recently used VHA services.

After adjusting for age, suicide rates increased for Veteran and non-Veteran populations from 2005 to 2015. However, rates for Veterans who did not receive care in the VHA increased faster among 6 VHA using Veterans.

Considering unadjusted and age-adjusted rates for 2015, Veterans who had recently used VHA services had higher rates of death by suicide when compared with non-VHA-using Veterans, overall Veterans, and non-Veterans. This is similar to information presented in the previous report and is consistent with findings reported elsewhere. 7,8,9 VHA-using Veterans are a population that has active health and mental health care needs and that is actively seeking care because those problems are causing disruption in their lives. Many of these illnesses, such as mental health or substance use disorders, are associated with an increased risk of suicide.